Book now .
About the experience "'Pizzica and tammorra for professionals'"

The rhythmic, repeated movements of the dance induce a state of abandonment of the mind, and when the pace becomes insistent, then you succumb to a trance that leads to ecstasy.

Dance as expression of relationship, dance as expression of emotion. Meet with traditional Neapolitan dancer, Marta, local who will engage you, step by step, in learning some of the typical Neapolitan dances, with the use of castanets during the dance punctuating the beat. The sound pulses as a force and an irresistible call to Nature: that which you perceive hearing the song, feeling the rhythm, and moving to the Tammurriate dance, is based on the gestures made working the rural fields, mirroring the scything of the wheat, echoed in the gesture called the "Do Ball 'Ngopp' o Tambur". These folk dances bring you joy and freedom through spirited dance, deeply anchored to movement that draws on the resurfacing of the centuries preceding ours, a true heritage of our popular form of expression. Through the traditional songs of Salento and the stories related to Pizzica, this is a unique experience, and the opportunity to immerse yourself in this ancient dance and the atmosphere of Napoli.
At the end, you will be given a typical dancer's scarf, allowing you to relive the experience of a typical folk dance with those you love.

The experience is for those who want to approach the world Southern Italian folk dance, those with dance experience and those without, who want to uncover the tradition of a people, through the steps, movements, gestures and meanings of these popular dances of Naples.
Comfortable clothing is recommended.

The 'folk and peasant ritual' dance of the Italian Mediterranean South has its roots in pre-Christian times (in the 'feminine and masculine" cults ascribed to the divinities of the Hellenic world). Over the millennia similar ceremonial dances and rituals have taken on very different connotations, expanding into geographical territories of the pre-existing Greco-Roman colony of Samnite. The elements incorporated in the dance are the kinetic "gesture and movement" of both arms and legs (that we associate with the Ancestral and Atavistic elements), impulse and vibration, and the frame drum (called TAMMORRA or TAMBURELLO depending on its construction and musical purpose).
'O 'ball Ncopp' ', known also as the TAMMURRO/TAMMURRIATA, is the most archaic peasant dance of the geographical area that surrounds Vesuvius, from the inland countryside (the Agro-Nocerino-Sarnese area) to the coast.
Not to be underestimated is also the choral expressive phenomenon of the Tarantella that, in different forms, but many analogies, embraces the whole of Southern Italy.

The "Tarentesimo" language of Puglia extended to Napoli in its most known and refined form of  the "Tarantella Napoletana" (Cumpricata and Semplice) - which by the end of 1500 was already performed by selected groups (Paranze), through a secret rite of initiation. Later, during the reign of the two Sicilies, at the court of the Bourbons, the dances were no longer defined as detached choral language but as a true and unique family of dances, sounds and songs, merged into a single, more composite ensemble. 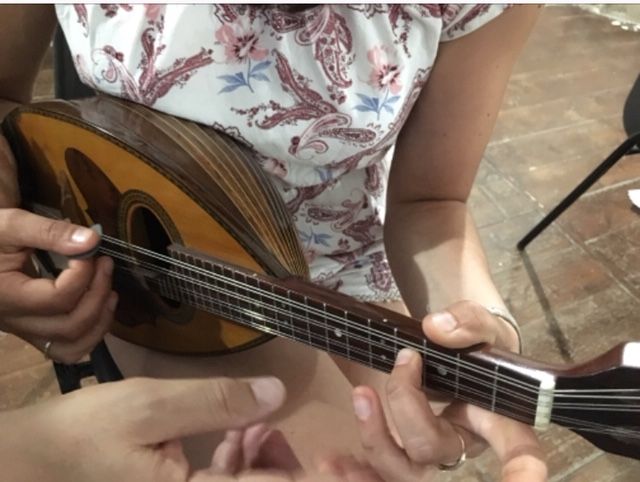